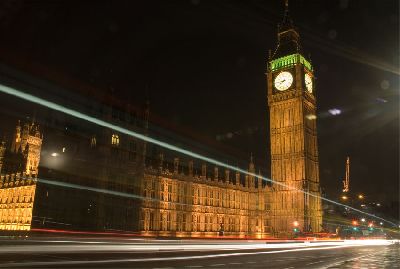 I made sure I had some free time after a meeting in London last Thursday and took my D200 and tripod down to Westminster. The underground was a nightmare and it took nearly an hour to get there from Finsbury square (where the office is). I’m sure I could have walked it quicker.

I got out at Westminster station to see the Houses of Parliament beautifully lit up. Don’t think I’ve been down here at night before. I walked all of 20 steps out to the bridge and set up to get a good view of the London Eye. The tripod I have is a little large (a Velbon Sherpa 600) and I felt like I should be toting a large format wooden camera around on it, but it is rock solid. I got some nice pictures of the London Eye and of some sort of jetty out on the river. I also got some nice shots of Parliament with long light trails from traffic across the bridge. Very satisfying.

Unfortunately I had to go to dinner at eight with some colleagues – turning up in weather gear and carrying a tripod – but I could have gone on for a few more hours given the chance.

Actually it was a bit congested on the bridge with at least 5 other all-weather-besuited tripod carrying males pointing various bit of kit at buildings. These included what looked like a Rollei and a large Hasselblad – just like Neil Armstong used to use. There’s always somebody with a bigger one……

In Gilnas in Laytown with Owen for a couple of friendly pints. There’s a great trad band here currently singing the auld […]

We will Rock you. A great performance by our little actress!